How Universities are Using ExtendSim

For decades, ExtendSim has helped prepare students for skills they need for today's technology-driven workforce. A small handful of examples of how ExtendSim is empowering students are showcased here.

START researchers participating in STEM outreach invited 60 high school women from around the country to get a glimpse of some of the on-the-job problems they could face as engineers. Faced with hypothetical crisis situations, students were challenged to build a resilient interdependent hospital that would fare well during a crisis situation. ExtendSim played a key role in helping students understand how a mass exit from a building would impact their hospital’s capabilities.

Entrepreneurial Design for Extreme Affordability, an initiative at the Hasso Plattner Institute of Design, involves graduate students from all seven schools at Stanford University designing comprehensive solutions to challenges faced by the world's poor.

Multidisciplinary student teams work to create innovations that lie at the intersection of business, technology, and human values. The final deliverable is a product or service framed in a comprehensive implementation plan including the business model, the technical innovations, the cultural rationale, and the appropriate next steps. ExtendSim has been utilized in many projects for this course.

The Naval Postgraduate School uses ExtendSim to educate and train students on the value of modeling and simulation for military use. It's being used for acquisition of supplies, risk assessment, mission analysis, PTSD healthcare delivery, UAV swarm risk assessment, and more.

Other Examples of ExtendSim Use in Higher Education

What Educators are saying about ExtendSim

"The project was an undefined, open-ended project in which they had three weeks to do research, learn ExtendSim, generate data, perform analysis, and write a short report about the project, etc. All the students learned ExtendSim in this short period of time with little guidance from me... I was quite impressed with each model developed by the three teams of the class... Overall the class liked ExtendSim... The one observation I made was that students who I thought did not understand the material very well, really came alive as a result of this project."

"For research, modelling and discussing - and the visualization of results - it is one of the best simulation programs! I used ExtendSim last semester in a seminar for explaining the different possible outcomes of an scenario, the bullwhip effect and coordination of distribution. All three lectures went pretty well and the students liked the animation and the diagrams."

"I’ve been using ExtendSim products in my classes since 2002 – and I appreciate your continuing support."

"Post graduate students are impressed by the use of advanced modelling tools for our teaching in the Masters of Water Resources Engineering Program. This enhances the status of our University."

Faculty of Architecture and Civil Engineering 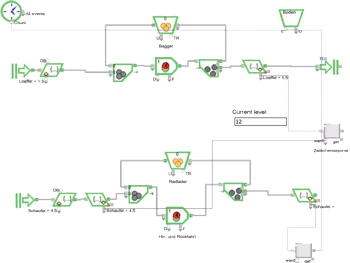 As part of resource and production planning for a construction company, students obtaining a Masters in Civil Engineering create an event-oriented, stochastic IT model and simulate various virtual operating states optimizing resources to determine the most cost effective solution. As a result, the connections between resource planning, costs, and time are shown in an almost playful way. Hochschule Augsburg is a member of the ExtendSim Adopter program.

The Stanford Graduate School of Business trains general managers themselves to model complex and uncertain business situations. Stanford offers seminars that consist of hands-on experience with advanced applications for modeling situations that include both uncertainty and discontinuous change. These situations often are called "ill-behaved" because they defeat the traditional tools of analysis. For example, financial spreadsheet models involving discontinuous change, such as winning an auction or unexpectedly altering a production process or marketing campaign (so-called "black swan" events), may arise in business projections, but actual models of such events are rarely, if ever, considered for optimization under uncertainty. As another example, the Operations formulas used to estimate throughput times in models involving congestion and delay often cannot be applied to systems that include unexpected service interruptions or complex routing of items (e.g., modern hospitals). ExtendSim is used to model operational situations in services and manufacturing, with an emphasis on dealing with congestion and delay in complex settings.

A comprehensive middle school and high school environmental education program coupled with support from the National Science Foundation and Ann Russell at Iowa State University created an ExtendSim model simulating the effects of rainforest deforestation and agriculture (planting pasture crops) on the amount of CO2 in the atmosphere and on animals living in the rainforest. Hence, the Rainforest Simulation Model was born.

The Rainforest Simulation Model makes a tropical rain forest come alive as carbon from the air flows through it! Designed for users with no previous modeling experience, this model allows users to delve into "What if?" sorts of questions about factors that limit forest production and the effects of land-use change on carbon cycling and global warming.

Go to site to view the model...

An MBA class project at Purdue University's Krannert School of Management has enabled a medical clinic to serve 37% more patients each day. Faculty and students applied factory management techniques to the clinic ultimately improving their productivity and quality of service.

Operations Management in the McDonough School of Business

Although originally written in 1972, Benihana remains one of the most popular Harvard Business School cases. The case captivates students because it brings operations to life in a familiar setting; that of a teppanyaki-style restaurant.

The Benihana simulation models an evening at Benihana's West 52nd Street restaurant. In addition to emulating customer flow patterns and dinner choices, the ExtendSim model incorporates a sensitivity analysis feature that enables the user to examine the impact of altering the restaurant's capacity, and the bar capacity.

Harvard Business School created a series of case studies to introduce students to the concept of simulation for the analysis of business decisions. These case studies demonstrate how a business analyst has a means of experimenting with a system and its possible future environments without disrupting the present situation.

Dr. Georgios Gallios, Associate Professor in the Department of Chemical Technology and Industrial Chemistry Laboratory General and Inorganic Chemical Technology in the School of Chemisty at Aristotle University of Thessaloniki, uses ExtendSim as an aid in teaching simulation and optimization of chemical processes in postgraduate courses.

Initially set up as a four year project by the European Union. 54 partner institutes in 21 countries are using ExtendSim to study 18 coastal sites in the EU project SPICOSA. This project has assisted Europe in its goal of achieving Sustainable Development by developing and testing a conceptual methodological framework for transition in coastal zones. The SPICOSA initiative originates from the fact that coastal systems are under increasing human pressure and policy has not been able to respond properly to the resulting negative impacts on ecological, social and economic systems.

SPICOSA´s overall aim is to develop a self-evolving, holistic research approach and support tools for the assessment of policy options for sustainable management through a balanced consideration of the ecological, social and economic aspects of Coastal Zone Systems (Integrated Coastal Zone Management).

All 18 study sites of SPICOSA are now well underway with the design of their ExtendSIM® models to describe a variety of coastal processes ranging from eutrophication, fisheries, and beach attractiveness to clam culture. A generic model library is a complete set of reusable model components which can be used to (re)build coastal models for new study areas, not much unlike the well-known Lego bricks.

The population of such a model library is one of the key challenges of the project and serves several purposes:

he principles of generic modelling have been elaborated during the SPICOSA Cluster Workshops.

For more information about ExtendSim use and its history in SPICOSA projects, read the series of newsletters on the SPICOSA site.